Two versions have been announced for One Piece: Unlimited World Red in Europe. 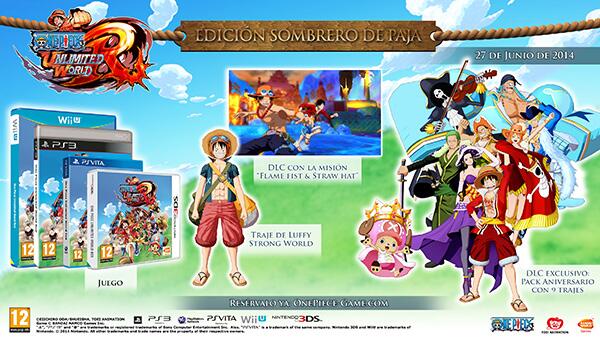 BANDAI NAMCO Games Europe S.A.S announced today that ONE PIECE Unlimited World Red will be reaching European and Australian shores on 27 June, 2014! This new game will be available on PlayStation®3 computer entertainment system, PlayStation®Vita handheld entertainment system, Nintendo 3DS™ handheld system and Wii U™! ONE PIECE Unlimited World Red is an action-adventure RPG game developed by Ganbarion Co., Ltd., based on the widely popular and praised ONE PIECE manga created by the renowned mangaka Eiichiro Oda.

Boasting amazing and exclusive content, this new game will offer hours of exciting gameplay where the players’ will happily discover two brand new characters and an all-new mode planned for the European & Australasian release: Battle Coliseum Mode! This fresh content will please all ONE PIECE lovers as it is directly related to the latest episodes in the Dressrosa arc!

For the impatient fans planning on buying the game on its release day (“Day 1”), BANDAI NAMCO Games Europe S.A.S. has prepared a unique offer to show this game’s uniqueness, the “Straw Hat Edition”:

Coming along with this exciting content, all video-game & anime devotees will enjoy the amazingly cute Chopper Edition and its items:

“After 2 episodes of the Pirate Warriors series, we decided to come back to another kind of game and create the best Action/Adventure RPG game possible for all ONE PIECE fans, thanks to Ganbarion and their tremendous knowledge; we are sure to top all our previous games’ and offer a fun experience within the ONE PIECE universe! Speaking of fun; we are bringing this new game to 4 different platforms: PlayStation 3, PlayStation Vita, Nintendo 3DS and Nintendo Wii U!” said Herve Hoerdt, Vice President of IP Strategy, Marketing & PR at BANDAI NAMCO Games Europe. “Creating this exciting Collector’s Edition based on Chopper has been quite a challenge for our Marketing teams, we are really happy with its diversity and is unique genre!”

ONE PIECE Unlimited World Red is scheduled for PlayStation®3, PlayStation®Vita, Nintendo 3DS™ and Wii U™ on June 27, 2014. For the latest news and updates, join us on www.OnePiece-Game.com. For the latest videos, check bngames.eu/OPunlimitedworldredvideos. For more information about BANDAI NAMCO Games’ entire line up, go to www.BandaiNamcoGames.eu.