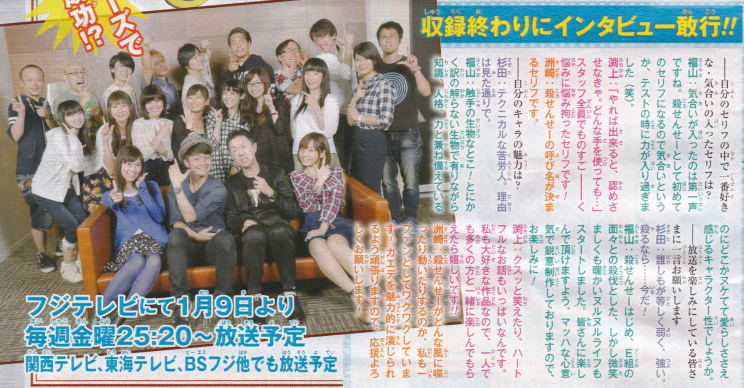 The Assassination’s Classroom anime will be launching pretty soon and a short interview was conducted by Weekly Shonen Jump. The voice actors for Koro-Sensei, Nagisa, Kaede and Tomokazu were asked questions such as what was their favorite line and what they thought about Koro-Sensei’s charm. 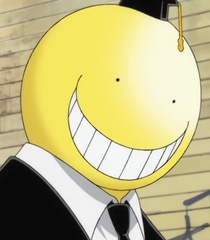 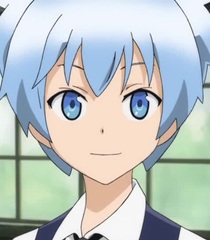 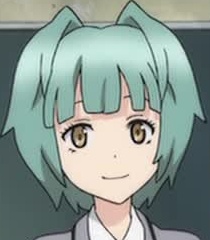 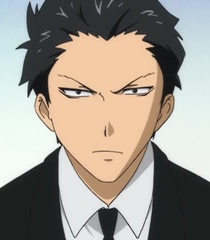 Interviewer: Everyone has favorite lines. Including ones you yell from your stomach, what is your favorite line?

Fukuyama: In my mind I hear my younger brother’s cry. One of the first lines I had as Koro-Sensei, during one of the times I tested for the role (Laughs).

Fuchigami: “Whatever path you’re on, you’re allowed to be sure. Even with your hands…” was a line the staff put in – The phrase is from a line that involves trouble inside of trouble!

Suzaki: A line about determining the nickname for Koro-Sensei.

Interviewer: What is the charm of his character?

Sugita: A technical man bigger than the world. You will see the reasons.

Fukuyama: The tentacles from the biological octopus! Anyway, while this organism does have advanced knowledge, personality, the character does whatever it feels like, even if it requires combining with other forces.

Interviewer: Thank you everyone, we are looking forward to the broadcast.

Sugita: Everyone is now equally as strong and weak. It’s whack… it’s now!

Fukuyama: As Koro-Sensei stated, everyone was brutal to the folks in E Class, however when he starts, they learn to enjoy themselves with others, it is an intensive production that is full of spirit, plenty to be entertained with!

Fuchigami: You can laugh, and have a heart filled discussion. I also love my work, and I am glad that so many people can enjoy it along with me!!

Suzaki: Whether Koro-Sensei is moving or talking, I am thrilled as a fan! I will do my best playing the attractive Kaede, thanks for the support!

Thanks Griffin for the translation.